Three different types of tests were used to investigate the antioxidant properties of the exine shells:

The peroxide value (PV) was used to determine changes in rancidity for the first two tests.
This is a widely used technique in the food industry and is a standardised IUPAC Method, 2.501, to follow the degradation of a fat or oil by assaying the peroxides and hydroperoxides formed which liberate iodine from potassium iodide. Values above about 20 mean that the oil is rancid and normally unusable.

The exine shell layer (yellow) is mainly composed of sporopollenin which has an approximately flat spectrum over the wavelength range 190-900 nm.  The absolute value of the extinction coefficient for Lycopodium clavatum is 1-2 x 105 m-1, which is not significantly different for many types of pollen exines. A single exine shell transmits approximately 45% of light at 450 nm.  The transmission of wavelengths between 190 and 900 nm is similar. The exine shell has in fact been designed by nature to give protection to the genetic material from ultraviolet light.

Tests were carried out on both exine shells (AHS) and also on ones where most of the intine (green, mainly cellulose) was also present. As can be seen below, both types of microcapsules gave greatly increased protection to commercial cod liver oil (which already contains some tocopherol as an antioxidant) 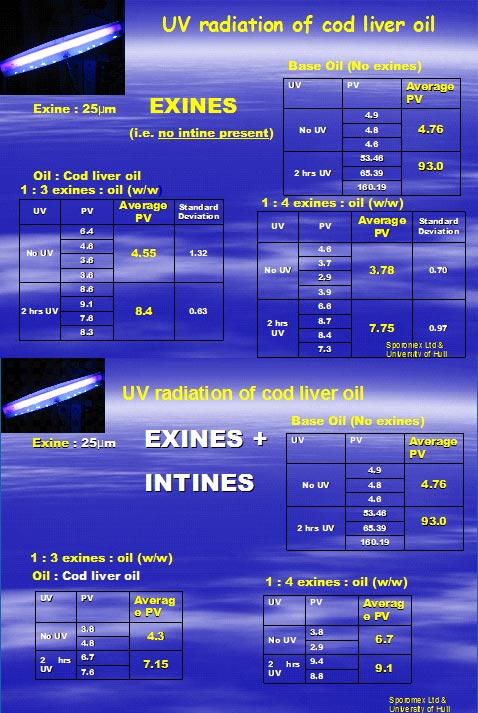 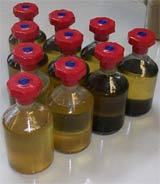 Experiments have been carried out over a range from 0.2% to 2.0% exine shells in oil. Both exine (AHS) and exine with intine(BHS) were investigated and typical results are shown here for cod liver oil purchased from a supermarket and already containing some antioxidant.

As can be seen, both types of shells had an antioxidant effect, which was even present at 0.2%.

A standard method of predicting the shelf-life of an oil is to use the Rancimat. This machine measures the conductivity of oil as it is subjected to oxidation in an air stream. The higher the conductivity measurement the more rancid is the oil. Once again the exine shells have been shown to greatly delay the onset of rancidity. Typical results are shown here for oil:shell (wt:wt) ratios of 0.5:1 to 5:1 .

Depending upon the exine shell type, the oil pressed out again following this higher level encapsulation can have a lower rancidity measurement than before it was originally loaded. The table below shows results obtained using cod liver oil, 40 µm shells (both exines {AHS} and exine/intine combination {BHS}) and a shell:oil weight ratio of 0.5:1 both before and after subjection to ultra violet radiation.

This demonstrates the ability of the BHS (exine + intine) shells to “clean up” rancidity, the peroxide value for the (exine + oil) sample being lower even than that for the original oil sample both before and after irradiation.

This effect even takes place when the oil is already rancid, as is shown below for an echiium oil that already had a peroxide value of 20.5 meq/kg. The results are those for echium oil loading into the different shells and then pressing the oil out again. For the exines alone (AHS) there was a small oxidative effect, but the exine/intine combination lowered the peroxide value.

The higher the proportion of exine shells, the greater the effect.

Micro-encapsulation for the pharmaceutical, food, cosmetics and personal care industries