The principle behind this technique is that the exine shells concentrate the contrast agent in a particular part of the body, where it then shows up brightly within the scanner.

There are three potential benefits from using this technique:

We have demonstrated that these microcapsules can be filled with a commercial gadolinium(III) MRI contrast agent which was slowly released in blood plasma due to enzymatic digestion of the exine capsule. Magnetic Resonance Microimaging Experiments were carried out at 11.47 T to characterise the release profile over time of the commercial contrast agent (CA) Omniscan. The loading level of the Omniscan was determined by ICP-OES to be 0.80%. The figure below shows four consecutive slices through the agar gel monolith containing Omniscant encapsulated in exine shells. Each frame has dimensions of 3 x 3 mm. An exine capsule that appears in several consecutive slices is highlighted with arrows here.

The plot here shows the release of the contrast agent over 8 hours. A maximum is reached after ca. 4 hours for the sample in human blood plasma and no significant release is observed for the control sample.

This technique can also be applied to non-conventional contrast agents such as food oils. The picture shown below was obtained after drinking milk containing the exine shell loaded with fish oil. 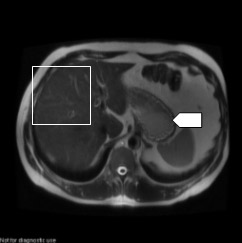 Photograph: Ten minutes after the ingestion of oil filled exine. Stomach mucosa highlighted by exine (arrow) and increased signal in the small vessels of the liver
– shown in the region of interest highlighted by box.

Micro-encapsulation for the pharmaceutical, food, cosmetics and personal care industries